Design for All Award

We are very pleased that we won an  International Design for All Foundation Award for the development of the extension to littleBits. The award was given for our research Making Electronics Accessible to People with Learning Disabilities. We told them all about the research we are all doing to make the sensory objects workshops more accessible for our Co-Researchers. The picture below shows our award. [For main Sensory Objects project please go to Sensory Objects]

As our project “Making Electronics Accessible to People with Learning Disabilities” satisfied the criteria for Design for All (http://designforall.org/) we can now use the logo in association with this part of the project:

Development of littleBits base

We used littleBits with our group from Reading College to introduce technology and ways of activating sounds, light and smells from the smell box (below). They worked well in many senses, but there were a number of issues with using them:

To address some of these issues, we designed a base with which to attach the littleBits components, increasing the size of the platform which might make the objects easier to handle. The initial prototype was made out of balsa wood to get an idea of the size, and to address issue 1 above we decided on a form which is tessellated, so that you cannot get the bit the wrong way round. Because the original components are clamped to the top of the bases, you cannot get them upside down either, which addresses issue 2:

Prototype made from balsa wood

Close up of a bigger bit which extends the LED bit:

The next image shows a close up of the connectors that were used. One end of the base has three spring connectors (these are just spring pins, with wires soldered onto them), and the other has a connector is made from model engineering brass tube (1.1mm diam):

The image below shows a close up of the static connectors made from brass tubing. The magnets are 4mm x 4mm diameter. On reflection 5mm x 5mm diameter would be better, and hold the blocks together more firmly. 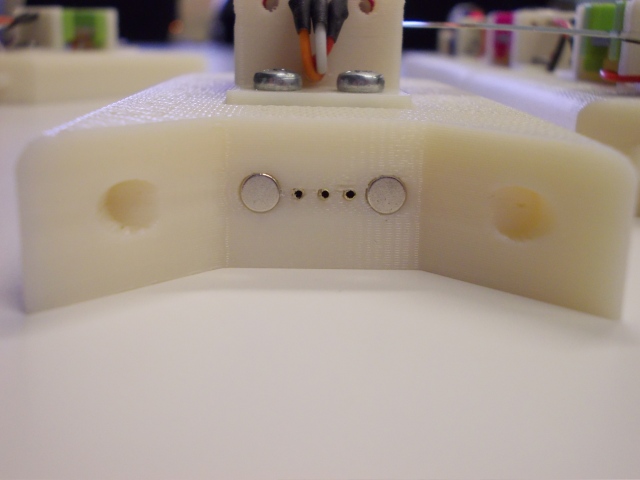 A view of the underside of the base shows the (rather crude) connections. These actually worked well (to my surprise!). The only difficulty with connections were the brackets which connected to the littleBits themselves. As the bits have very small and fragile connectors, a few were damaged in the process of making this, and so the brackets are being redesigned to include very light spring connectors (similar to the ones used by littleBits).

The next stage of development will include the following:

If you have any comments or suggestions, then please contact me.